On that day in 1943 the squadron had a few tens of ground staff, a handful of pilots and no aircraft. Formed as a fighter squadron they were expecting to fly Spitfires, instead, in the August the first of the P-40 Kittyhawks turned up. An aircraft they came to admire and venerate. In this aircraft ,they notched up over 1,000 operational hours each month from June to September 1944. In June they exceeded 1,400 operational hours, the most for any squadron in 78 Fighter Wing and better than any of US General Kenny's fighter squadrons at the time. During June they were involved in the last major combat by the RAAF in the South West Pacific Area (SWPA).

After the war the squadron converted to Mustangs. Many of the pilots who passed through during that time, went onto distinguished careers in Korea. An example was James 'Jim' Flemming, who served in 78 until four months before it was disbanded. He served with distinction in Korea and had a rewarding career after that conflict in the RAAF, retiring with the rank of Air Vice Marshall. At the end of March 70 years ago, 78 Squadron was disbanded. They have never been reformed.

An excerpt  from  "This Smuttee Squadron" by Gordon Clarke

The History of 78 Squadron RAAF during and post WW2

78 Squadron RAAF was formed with Kittyhawk P 40 Aircraft at Camden, NSW Australia in July 1943 ,during the difficult period of taking the attack to the enemy in the South West Pacific Area (SWPA). Some four years and eight months later, the 78 Squadron was no more, relegated to the back of the minds of the young men who served faithfully in her during that short period. When disbanded they were flying the Australian license built Mustang fighter from Williamtown, NSW, just a few hundred kilometres north from where they were formed.

To the men and families of the men ..all who served...

This is their memorial. 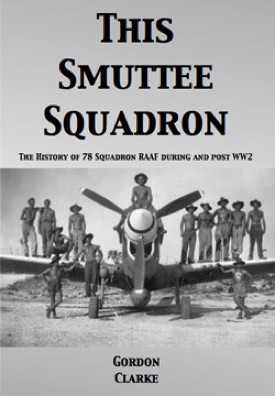